Since the beginning of this project my target had been to reach Russia. I’m relaxed about the sailing, eating, sleeping, and people - that will be fine. But borders and visas unsettle me more. The required authorizations are time consuming and sometimes costly to attain. And still uncertainties remain. They impinge upon appreciation of the day to day, like clouds that won’t clear.

And, parallel to the official target, there had always been a privately held daydream to close the loop. To – someday, somehow - arrive at where I had departed from: converting this wandering into a circumnavigation of sorts. Would that be possible?

Well, kind of.  There was an Irishman – Miles Clark - who circumnavigated Europe by yacht, linking Barents Sea to Black Sea by a route through the White Sea and rivers including Volga and Don. That was in 1992, which were perhaps easier times politically. And unfortunately poor Miles died soon after completing the trip, possibly from toxins ingested whilst navigating the Russian waterways.

Red boxes mark the limits of Russia's Black Sea border. I'll try to reach the southern one, then head to Bulgaria by ship, then head north by bike

I studied this and other potential routes. An interesting alternative looked to be by following Ukraine’s Dnieper river then other waterways to the Baltic, from where the White Sea could be reached. But - ultimately - the hours on Google Maps and Wikipedia failed to inspire a practically realistic plan: the distance would be too far to sail and paddle in one summer season, and the inevitable Russian winter too bleak. This, and the realisation that I don’t have an appetite for the administrative obstacles, allowed the idea to founder.

Relieved of the burden of requiring a maritime/waterway route, other options could be considered. I happened upon the EuroVelo 13 ‘Iron Curtain’ bicycle route, that extends to the coastal border of Norway and Russia: to the exact same location I started sailing in May 2017! An Excel sheet later and a new plan was born. 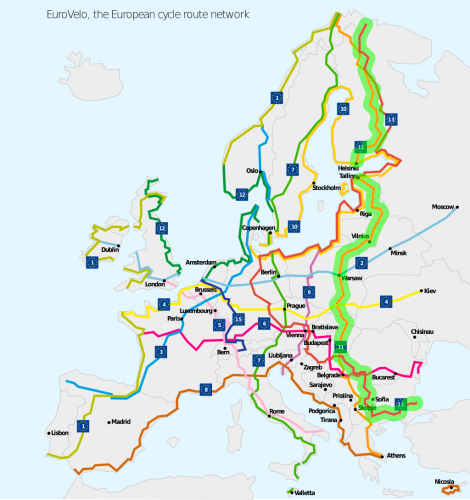 A possible EuroVelo route back to Grense Jakobselv in northern Norway (EV13 and EV11, highlighted in green)

When ponder the options I revisited my motivations. I’d wanted to sail into Russia to reach out and make a human connection across borders - to highlight the basic similarities between us all, and underline how we are all in the same boat from an environmental perspective. Planetary problems require a coordinated response, so we better start seeing our neighbours as our partners pretty damn soon! There is no coincidence that this theme developed at the time of the Brexit vote.

By looking into the Russia finish I did reach out across borders, and I am happy to report that the enthusiasm and willingness to help of the Russian people has been just as forthcoming as it has been with people from elsewhere. Particular thank yous to Tatyana, Dmitrii, Yulia, and Vladimirs various: your contributions have been significant, inspiring and - for the story of the journey - necessary.