Why this charity? | Donate

Jonathan Dunnett almost became a psychologist, was for a long time a windsurfing instructor, was briefly a telephone pole replacement co-ordinator, and spent a good few years lost - during which time he nearly became an electrician. He now adventures, and writes. He funds his modest needs by working on websites. At the time of writing he also works on a mental health programme that encourages walking and talking. He is better at the former.

He was born in London in 1974 and progressed through school, university and adult life - failing, like many of us, to find his niche. He struggled, but was good at hiding that.

He'd long wanted to windsurf around Britain, and had hidden that too.

Jono had a "rough patch" and probably ended up depressed. Life was failed relationships, career nothingness, inability to find pleasure in anything, lack of enthusiasm for any of the standard pathways that life seemed to offer. "You can get drugs for that" people told him "Go see a doctor!"

Instead he windsurfed round Britain and at last learned to be comfortable in his own skin. He'd cast off his worries about not particularly fitting in, which of course made him fit in better. There were other changes too.

For the first time in his life he had something to say - a story to tell. He started writing. Towards the end of the book he may have become a writer. More insights followed, including the realization that he'd rather pointlessly spent most of his life grappling with social anxiety.

The next jump was easier. Not the easy option - a number of those he decided to let pass by. Once the seed of the idea to windsurf round Europe had been sown, and feasibility established, there really was no option at all. That path became the only path. He faces the next expedition with acceptance of the highs and lows it will bring, and with a tranquil determination.

The expedition will start in the far north, at the coastal border between Russia and Norway, well inside the Arctic Circle. Norway is huge and travelling around the top and down the west coast will take months. After that comes the rest of Western Europe, including all or part of the coasts of: Sweden, Denmark, Germany, Netherlands, Belgium, France, Spain, Portugal, Spain again, Gibraltar, France again, Monaco, Italy, Albania, Greece, Turkey, then either Bulgaria - Romania - Ukraine or Georgia. The objective is to reach either limit of, or anywhere along, the Russian Black Sea coast. The blue line shows the SAILING route. 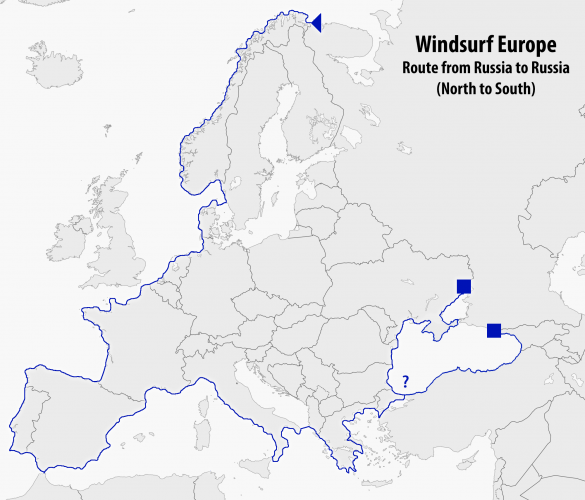 After sailing as far towards Russia as is practically possible, I will take a ship to Bulgaria, and then return to Norway by bicycle, so that the journey finishes where it began. For this part of the journey I will follow the EuroVelo cycle network via routes 13 and 11.

There are numerous reasons. They all boil down to having the opportunity. Having the opportunity is such a privilege that it feels an obligation to accept. This is the only path available for me to be true to myself. The fear of regret - of having had the opportunity and not trying - is more powerful than the fear involved in giving it a go! For now, the path of expedition windsurfer seems right.

Why this particular challenge?

I finally windsurfed my native island of Britain in 2015. That's how I 'got to know' my island. Now I want to 'get to know' my continent. It seems a logical next thing to do.

To the best of my knowledge there have been no previous attempts to windsurf the entire mainland coast of any continent.

I will sail alone and unsupported. There will be no land support following me. I will carry supplies to sail days at a time where necessary, and I will gratefully welcome support offered along the way or through the Local Contacts Network.

As sailing expeditions go, in financial terms this is micro-scale. It is also rather unusual in that it is effectively asking you - coastal dwellers on the route - to be part of a distributed team that will allow it to continue and eventually succeed.

Upfront costs are sailing equipment, expedition gear, and transport of myself and gear to northern Norway. Equipment sponsors are generously supplying much of the kit.

Once underway, outgoings are principally food. Sometimes I will benefit from a donated meal, other times I'll cook on a small stove or - where available - get take-out pizza. I will self-fund this aspect of the expedition through various (modest) income sources, and existing savings.

I have decided that I will not seek or accept a corporate/cash sponsor. My reasons for this are:

Equipment sponsorship is a different case. The trade-off is entirely transparent. I choose particular gear because it is good, it will maximise my chances of successfully completing the expedition. People see I use it and conclude with a degree of confidence that the gear is good. Everyone is happy.

I am estimating a minimum financial requirement of 500€ per month, factoring in that people are generous and I will benefit from a few free meals along the way. The drain on my initial pot of savings will be mitigated to some extent by the following income sources:

I am quite prepared to assume some debt in order to complete the expedition. My rationale for this being that debt can be paid off later, whereas advancing years and the physically demands of windsurfing round Europe require that I get on with this now.

I will start the expedition in Northern Norway, on the border with Russia. I went to check out the windsurfing conditions there in August 2016 and sought advice from local kayakers and wilderness explorers.

The Barents Sea is inside the Arctic Circle so the water stays very cold year round. In a way that makes choosing a start date less restricted: since the water doesn't really warm up, there will be no waiting for that to happen!

There could be snow showers in May, and snow on the ground at sea level is fairly likely. It will at times be very cold. At other times it could be 'warm'. Much depends upon the year. I'm pretty sure that the windchill when sailing in any significant breeze will make it feel very cold. Preparing well and having the right gear is essential.

Although the fjords do sometimes ice up, ice will not be an issue nearer the open sea.

From 17th May there is midnight sun in North Norway, so it will never get dark. This is a big comfort. I will be able to sail whenever conditions are good, and won't have the usual concern about being caught out at sea in the dark.

Settlements are few and far between. Smaller settlements probably won't have shops. I'll have to carry supplies to sail several days between the larger settlements.

Mainland Norway does not have polar bears. Although brown bears are present in the Finnmark border-region, an encounter is very unlikely. Marine life includes orcas, but there is no reason to consider these a threat.

Norway is big and presents very significant new challenges. The main focus of my attention is directed there at this time. I will more closely consider the challenge of subsequent countries when they (literally) near the horizon.

Timing is very important. Sailing during the frozen and dark Arctic winter would not be possible, and average winter temperatures in the Black Sea region are also below freezing, meaning that both start and finish of the expedition need summer months.

Challenges of the expedition include:

Countries (also principalities and other...) on - or possibly on - my planned route are:

The EuroVelo cycle network (routes 13 and 11) allows Black Sea and Barents sea to be linked, by passing through the following countries:

This attempt made possible by the kind support of: